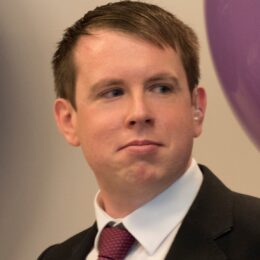 Committee membership: Chair of the Health and Safety Committee and a member of the Community Liaison Committee

I became a Councillor: I was approached by an existing member of the council about standing for election when I was 20, I asked about the role of the council in the community. This sounded like a good opportunity to make a contribution to my community and to earn some experience, so I agreed to have a go.

Achievements: In 2015 I became the council’s youngest chairman at the age of 29 and in 2018 I became the second youngest chairman at 32. In this role I represented the Parish Council at many events in the parish and delivered flowers to people on their golden or diamond wedding anniversaries or on their 100th birthdays. This was always a lovely thing to do. I handed out awards at the Rainford Show, presided over the Boys Brigade and Girls Association parade evening, attended dinners hosted by the Senior Citizens Committee and the Crank Village Community Association and (a particular highlight) I opened the Crank Gala. I also represented the community by laying a wreath at the war memorial in St Helens Town Centre and by helping unveil the new war memorial in Crank; which was the result of a fantastic effort by the community.

I helped set up the Rainford Beer Festival and take huge pride in the still growing success of this event. I think we now have over 600 people attending every year and we have raised many thousands of pounds for the local community.

I also helped set up Rainford Community Cinema and have helped organise and run many of the events we have run since. Our first showing of Polar Express is a particular highlight of my time as a councillor. We advertised the showing in the summer and were immediately asked to put tickets on sale. We sold out in two days, put more tickets on sale and sold them out. We then put a second showing on and sold that out in two days. Over 300 people attended over the two days and it was just magical. Our Easter and Summer holiday showings have also been a lot of fun. I am really proud that we provide cheap cinema showings for the benefit of local residents, in the heart of our community.

The Parish Council played a big role in the creation of Rainford in Bloom. This was during my first year as chairman and I adopted Bloom as my chairman’s charity. Together we raised around £7,500 and did some wonderful work. I was a member of the RIB committee for over 5 years.

I helped secure funding for a defibrillator at Springfield and I am working with residents at Rainford Junction to plant daffodils, snowdrops and wildflowers, to carry out litter picks and to revive flower beds.

I helped secure free exercises classes for kids at the village hall. I have helped run fundraising quizzes for a number of local good causes and in my second year as chairman I adopted Rainford Guides as my chairman’s charity.

I have been a governor at Corpus Christi Catholic Primary School since 2017 and was elected chairman of the governors in 2020. This has been a demanding role but very worthwhile

You can find out more about which cookies we are using or switch them off in settings.

This website uses cookies so that we can provide you with the best user experience possible. Cookie information is stored in your browser and performs functions such as recognising you when you return to our website and helping our team to understand which sections of the website you find most interesting and useful.

Strictly Necessary Cookie should be enabled at all times so that we can save your preferences for cookie settings.

If you disable this cookie, we will not be able to save your preferences. This means that every time you visit this website you will need to enable or disable cookies again.